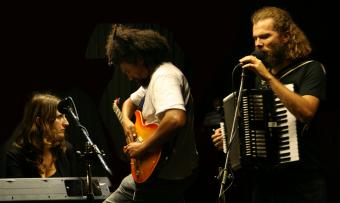 Riku Lätti has established himself as a songwriter/composer/performer in locally in South Africa and has travelled abroad to Belgium and the Netherlands to perform amongst others in the Paradiso in Amsterdam with Gert Vlok Nel. Once labelled as the "saviour of Afrikaans music" (Paul Drosdzol, SA Rock Digest) he has created a brand of Afrikaans music that is refreshingly original yet still appeals to a wide audience.

Riku formed a production company Radio Lava with composer and arranger Jahn Beukes which is currently producing albums for various established South African artists. Lately he has been involved with music scoring for film and television (including the feature film Hanna Hoekom for which he won a SAFTA Award). He has released 12 albums, some of which won various African awards. He has been honoured by Oppikoppi, the biggest Rock Festival in South Africa, to have the 15th birthday festival named after his song: "Smoorverlief".

Riku and Jahns debut album "Radio Lava", has made the prestigious list of the 25 best South African albums of all time. As songwriter Riku has had the privilege of having his songs sung by some of South Africa's biggest stars. He is currently busy writing the Faustian musical "Blood and Wine" which he claims will be his best work to date.