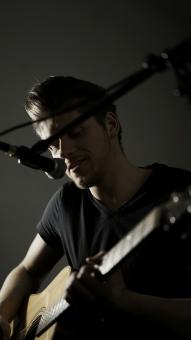 Justinas Stanislovaitis founded Alive Way in 2009. The band’s premiere live performance was at Roko Naktys and since then band members had changed to better more suited individuals that had like minded goals. Alive Way became a 4-member band which consist of Justinas Stanislovaitis (lead vocals/rhythm guitar), Povilas Komaroviskis (lead guitar), Dovydas Saparis (Drums) , Kristina Jureviciute (Back Vocals). These dynamic people began performing at large national venues such as festivals and the like. The one performance that changed the direction of this band was the when they attended an international song contest called Eurovision 2012 which was televised nationally. This contest changed their future. One single “Amazed by You” was played at almost all national radio stations. Their incredible sound was the hit of Europe and Alive Way was on the road to success. Alive Way’s songs are biographical and autobiographical, all told with a great rock sound to please audiences from all over the world. After all, when artists such as Bryan Adams, Bon Jovi and Aerosmith influence you, you know the audience will listen. That hot rockin’ sound carries a beat like no other. Alive Way has taken the reigns and has brought rock to the next level.